Oakland Insurance approached us to carry out a brand refresh project, as they felt their existing branding had become outdated.

While they were confident that they offered expert insurance knowledge and a first-class customer experience, they lacked the skills of an in-house marketing team to lead the project and felt overwhelmed at the prospect of undertaking a rebrand ...where would they even start?

Thankfully a google search led them to Walkers (Our SEO expertise paying off) and so began the process that would allow us to become a marketing extension to their team.

As always, we began by listening. A fact-finding mission that would allow us to engage with staff at all levels to provide an in-depth knowledge of Oakland Insurance, their team, their offering and importantly their customers. We visited all branches (Belfast, Downpatrick, Larne, Magherafelt and Limavady) where we interviewed staff and listened to insurance horror stories from people who had got it wrong with previous insurance providers. We also heard stories from satisfied customers allowing us to understand what it was about Oakland that the customer valued, and learned the insights that could inform future customers that Oakland would be the best option for them.

We gathered thoughts on the existing brand, as we wanted the process to be an inclusive one so that the team could claim ownership of the new brand. This would give us buy in across the company and overcome any resistance to change. Most importantly, it would also allow us to understand parts of the existing brand and marketing materials that were treasured by both staff and customers that needed to be retained. The owner of the company, while open to the need for a rebrand, felt a personal connection to the Oak tree in the existing brand and felt that he wanted some continuity linking the tree from the company launch and through the development, as the company like the tree, continued to grow.

We also learned that the staff and customers had developed a love for the company mascot Oakey Doakey, a squirrel who would appear at community and family events. Staff actually pleaded with us not to kill off Oakey Doakey.

We also learned that while the company was performing well, their customer profile was too reliant on an older demographic who liked to purchase via phone or in branch. Long term this would present a threat, as research proves a younger and more profitable demographic prefer to purchase online. The result being that we needed a culture change in the business to drive more traffic through the website. To enable this, we would require a new website along with customer engagement via digital and social channels.

The result was a total brand overhaul, introducing a new logo, colour palate and font, to reinvent the brand as a modern, local, professional, yet friendly provider. 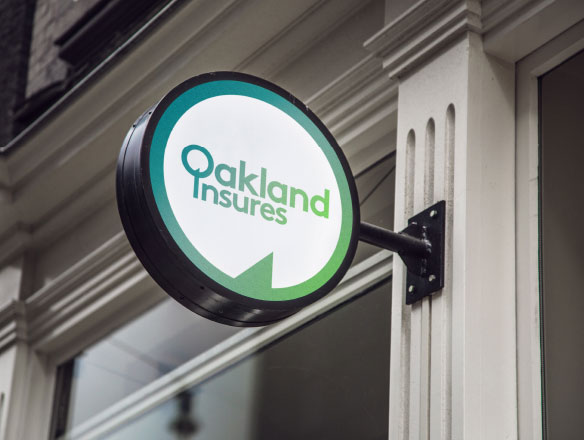 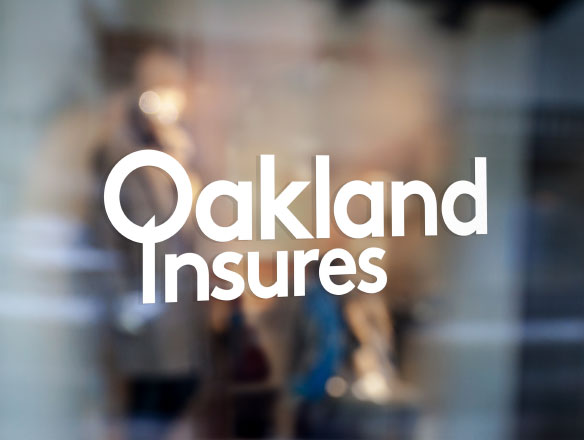 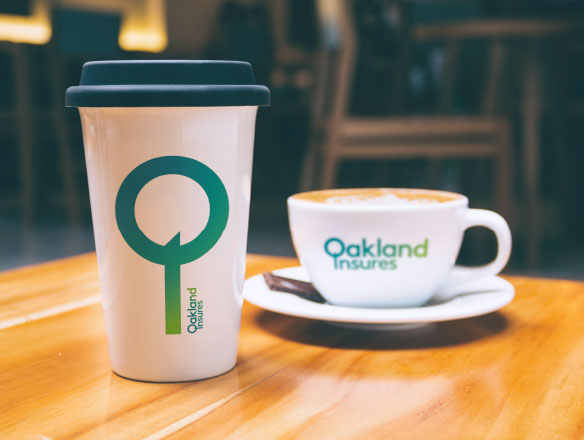 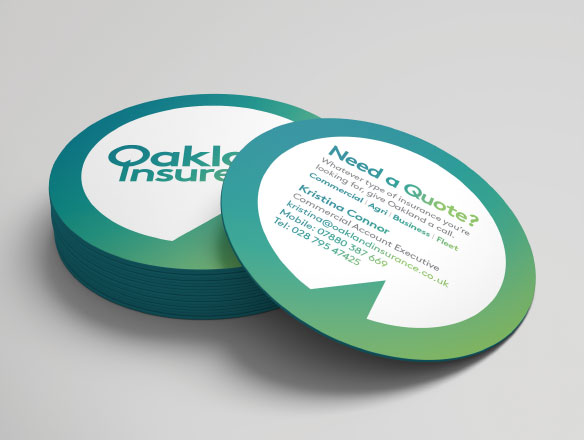 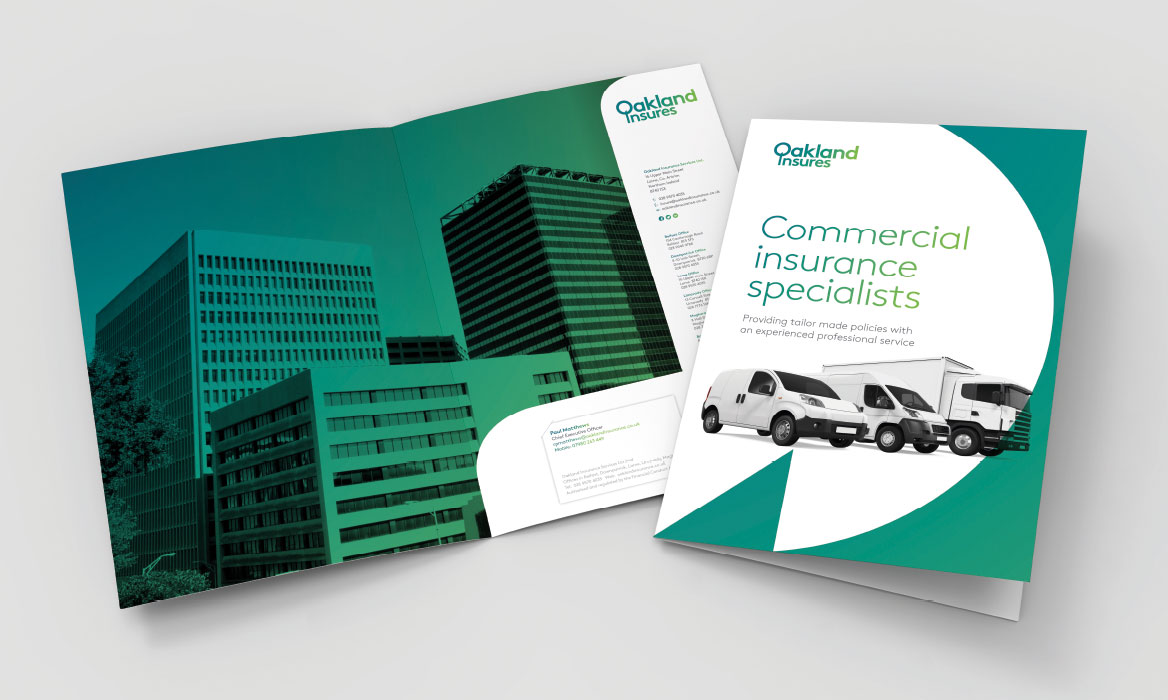 We launched the new brand with a TV campaign which confidently delivered the services on offer. We created an animated advert, but used members of the Oakland Team from all branches to provide a regional tone and to allow the team to feel the ownership of the new campaign and buy in to the new brand. We even included a guest appearance from Oakey Doakey for consistency with the old brand, which delivered an element of fun and friendliness.

The brand was applied to all aspects of the business. Oakland grasped the need for the rebrand and old branding was removed from all branches. Office signage was replaced, new brand coffee cups, pens, notepads and umbrellas were purchased. This was carried through from the physical to the digital, with a new professional, clean and user-friendly website. The creative was carried through to the social channels with all posts created in the new brand style to ensure consistency across all forms of communication. 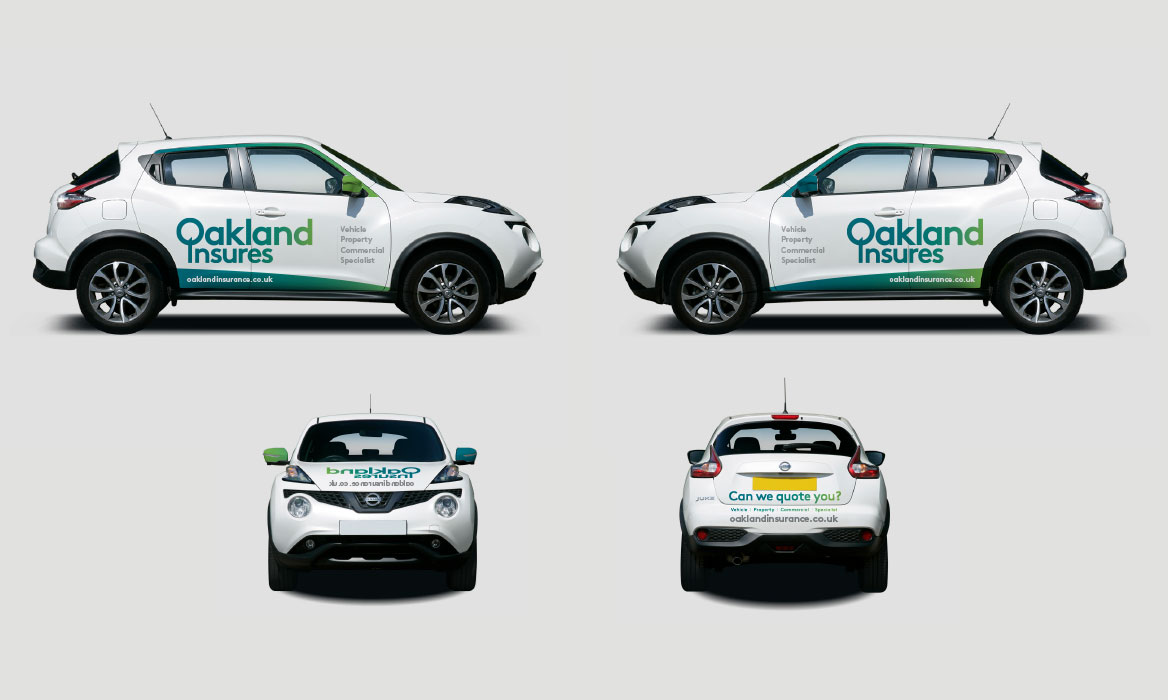 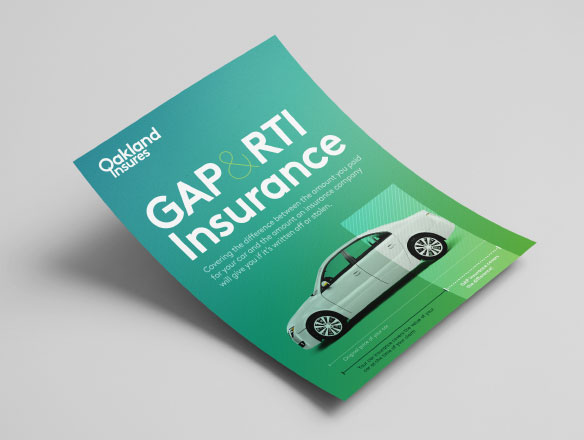 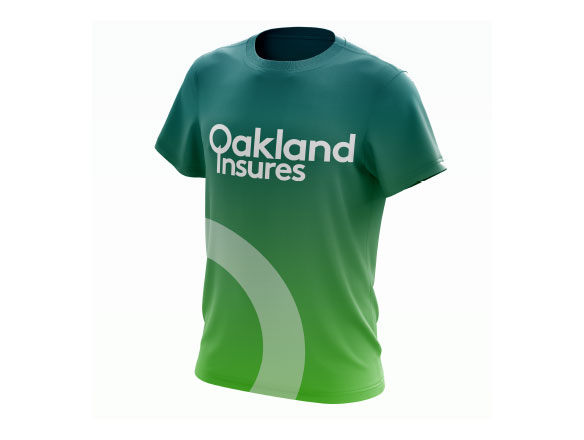 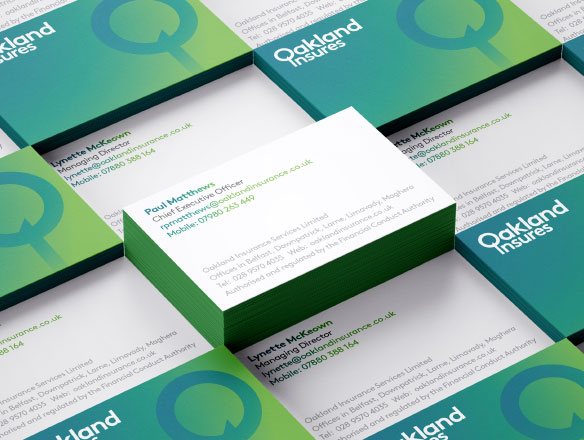 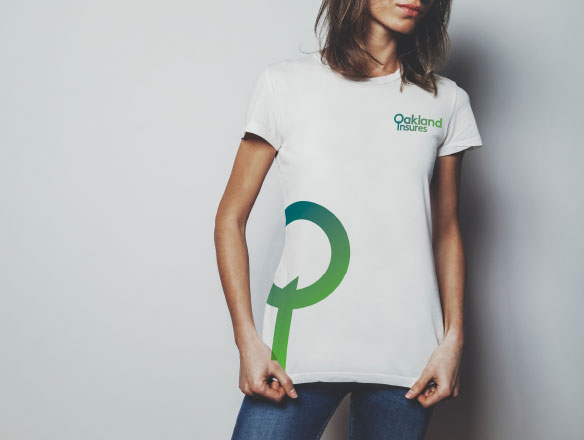 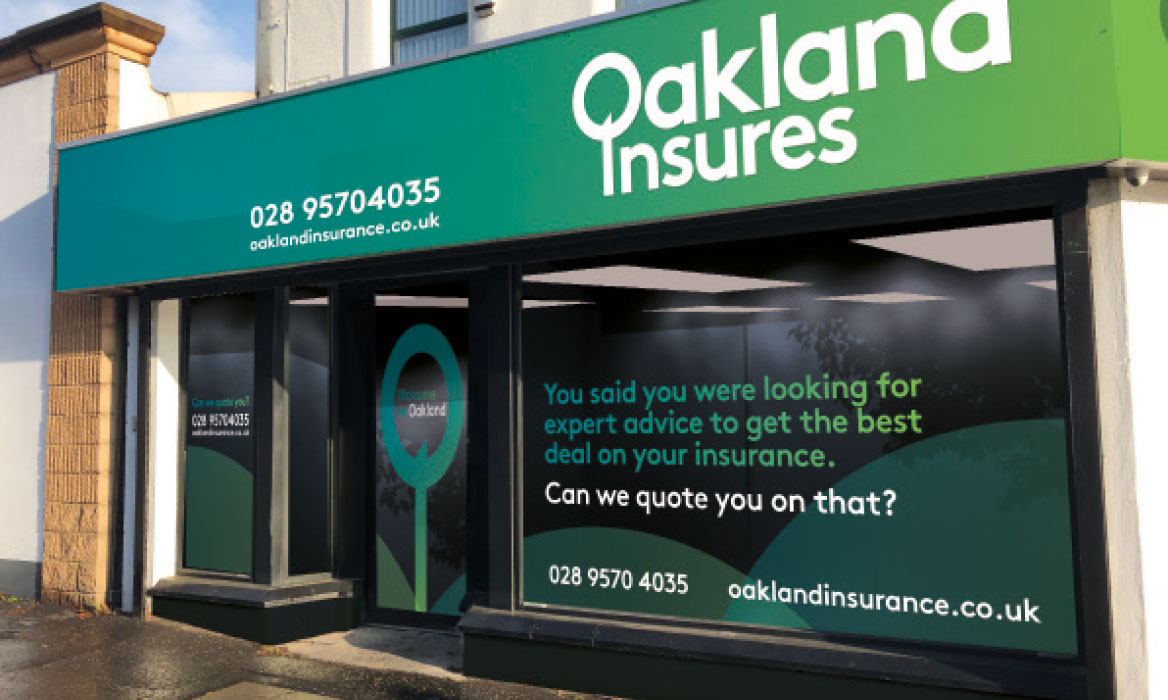 Oakland Insures is a relatively unknown brand with a strength around their established branches. With a limited budget we had to be selective with our media choices, spending enough on the launch campaign to grow awareness, but also to leave enough budget to implement a year-round strategy.

We launched the advert on TV as the quickest and most cost effective medium to deliver full province reach. In conjunction with the launch of the new website and our key objective to drive more sales through online, TV would be an essential part of the strategy. Due to second screens (iPad and Phone) TV adverts can be acted on immediately driving traffic directly from TV adverts to the website. UTV delivers the largest commercial audience in Northern Ireland and we introduced C4 to the schedule to target a younger more affluent audience. Ofcom data also revealed that over 60% of TV was still watched live at the time of launch to avoid fast forwarding through the ad break.

After the initial launch campaign, we were able to transfer from a linear schedule to digital platforms using the UTV and C4 catch up services. This allowed us to employ a year-round advertising strategy, maximising the usage from the TV production budget and targeting a young digital friendly audience.

Assets created for TV could also be used for digital and social advertising via YouTube, digital advertising and social channels. Delivering value production in an environment which has the viewer 1 click away from requesting a quote.

Building on the success of the branch network and not wishing to exclude the traditional customer, we employed bus advertising on routes that linked branch locations with key neighbouring towns and key 48 sheet sites geographically positioned within one mile of branches. 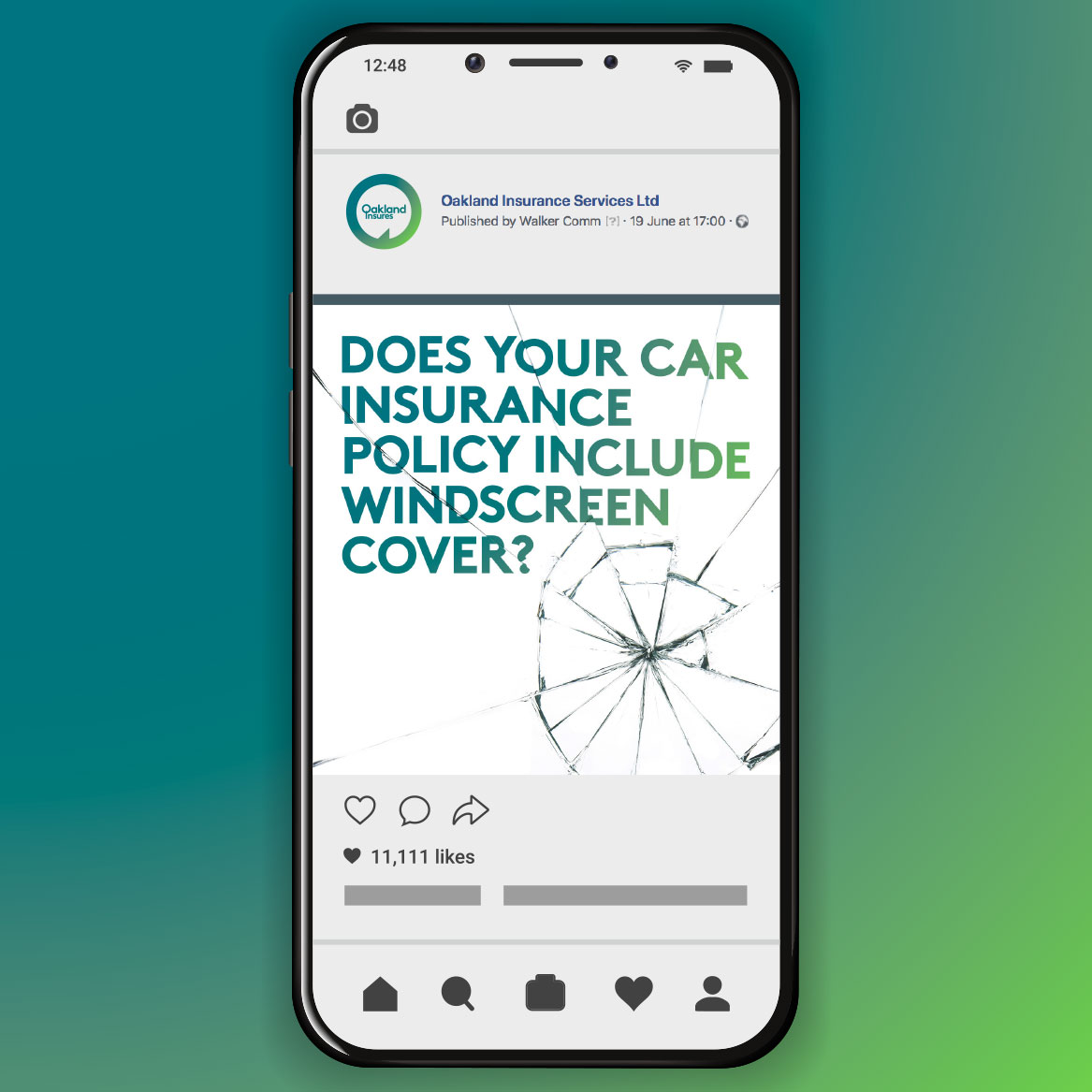 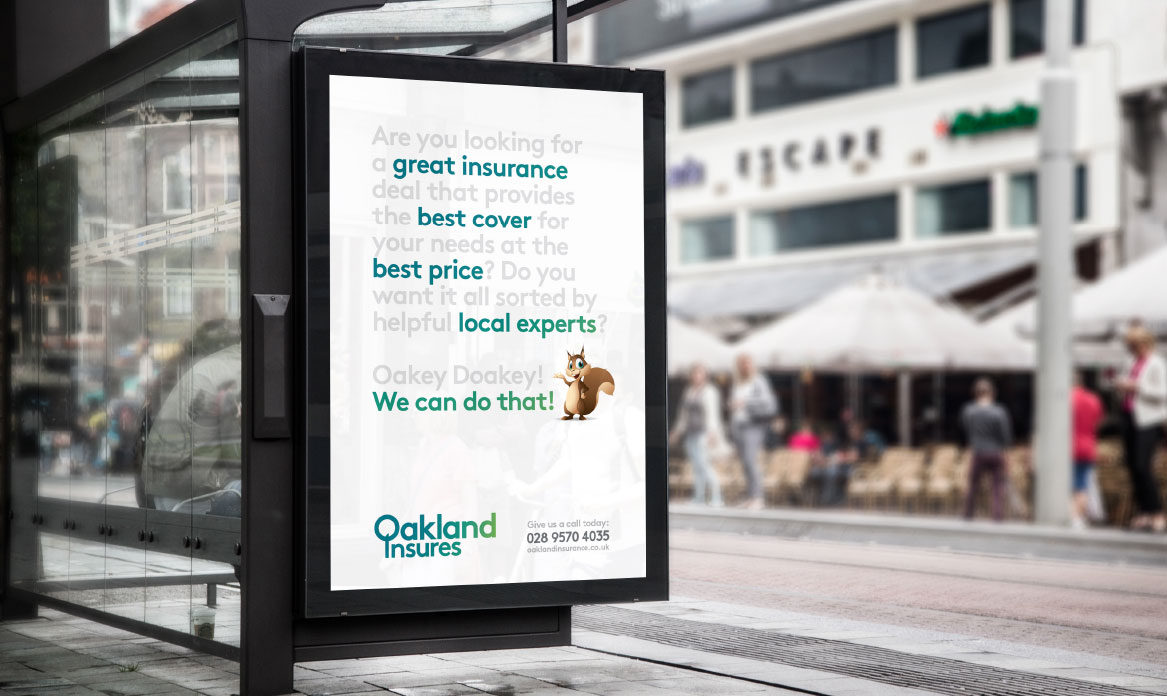 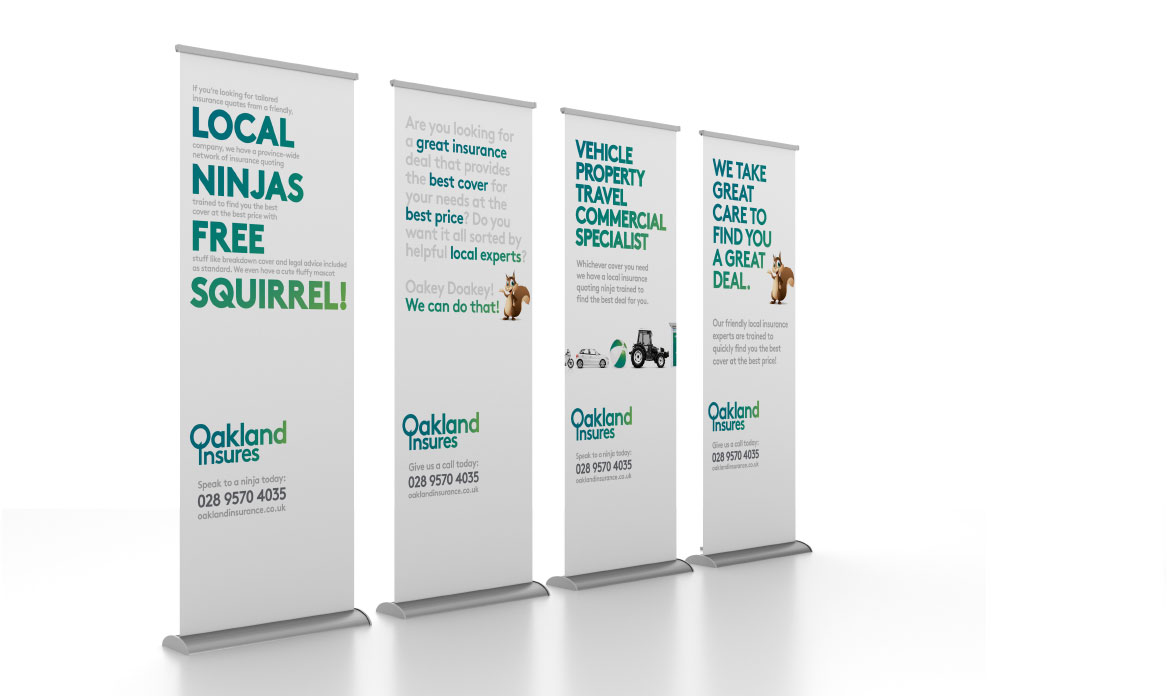 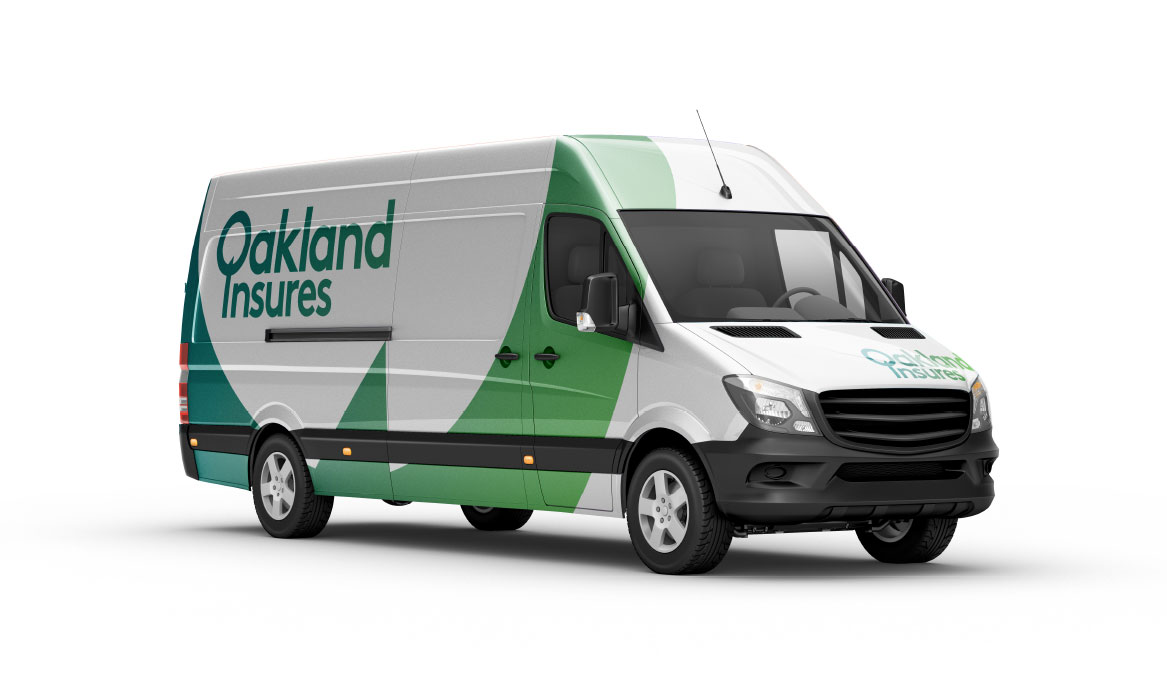 We produced a visually impactful new brand with which the client was delighted:

I couldn’t be happier with the campaign so far, feedback from all branches has been overwhelmingly positive, we love our new brand. This is now being carried through to the social, each post is individual and yet consistent, eye catching and engaging, they achieve a purpose and yet still deliver that element of fun that we believe Oakland is all about.

The posts lead the person to the website which then offers a very complimentary and professional platform. The advert content is becoming engaging and reflective of the ethos of our firm and I am excited to see the effect this will hopefully have for Oakland this year. The Walkers team are certainly delivering excellence.

After the first nine months of the campaign we had managed to drive 25% of all new business requests online via the website, essential for long term growth strategy. 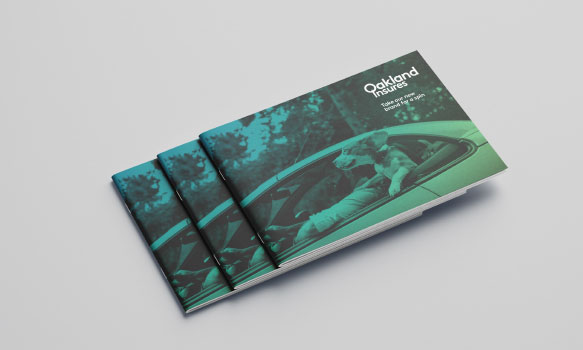 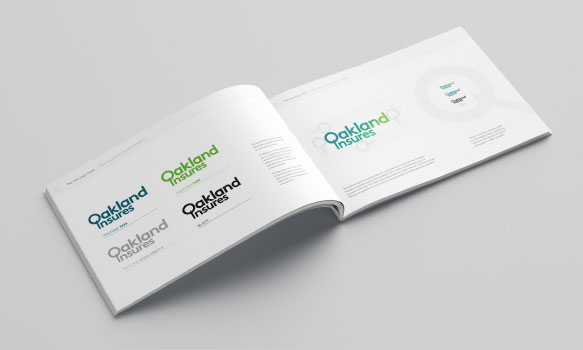 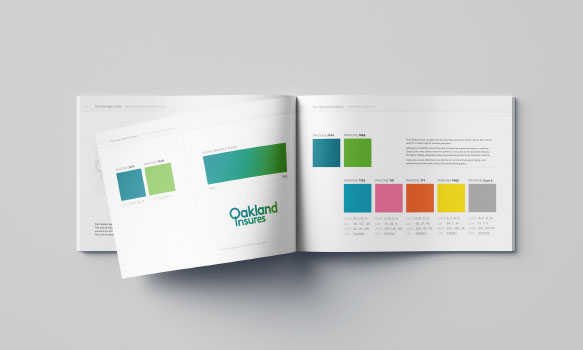 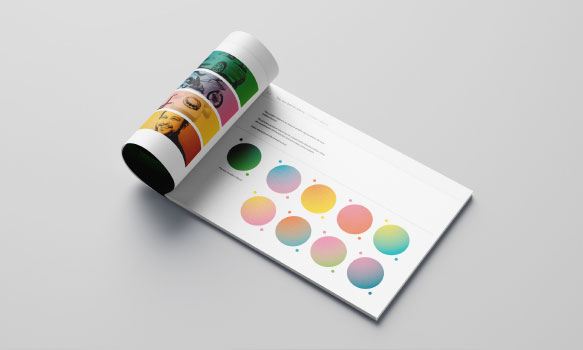 Store of the Year Awards